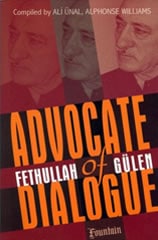 The contemporary Muslim world is perceived as a seething cauldron of conflict. “Islam” is synonymous with “oppression” and “Muslim” with “terrorist.” Muslims seem to have become the dreaded “other” people who cannot be understood. But one influential Muslim leader shatters these stereotypes. M. Fethullah Gulen is invited to the Vatican for a private meeting with the Pope, meets leading Israeli and Turkish Rabbis, announces his friendship with the Greek Orthodox Patriarch, and strives for dialogue. His dream is now a vision that attracts people who choose altruism over materialist individualism. Being the spiritual leader of milions of Muslims, he clearly is a voice that must be heard.

Ali Unal is a renowned scholar and a prolific translator of works with an Islamic theme into English. He has written for many periodicals and is a columnist for Zaman daily newspaper. His published books include Living in the Shade of Islam, Islamic Perspectives on Science, Islam Addresses Contemporary Issues, The Resurrection and the Afterlife, and The Qur’an with Annotated Interpretation in Modern English.   Email : bkubbe@yahoo.com Twitter : Facebook :

Be the first to review “Advocate of Dialogue: Fethullah Gulen” Cancel reply