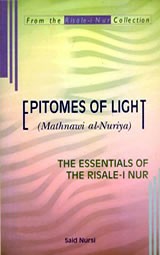 Bediuzzaman wrote “Mathnawi al-Nuriya” to serve as a seed for the “Risale-i Nur” collection. In this book, each of his golden thoughts revealed itself as a shoot, a drop, a bud, each of which later became like a bubbling stream, a perfumed rose garden, a forest murmuring with majesty. They stimulated and excited Muslims’ feelings based on faith and contemplation, while leading many unbelievers to re-evaluate their thoughts and ways. “Mathnawi al-Nuriya” resembles an index of many topics, each of which needs a separate book to explain, and each of which would later be elaborated in the “Risale-i Nur.”

Be the first to review “Epitomes of Light” Cancel reply