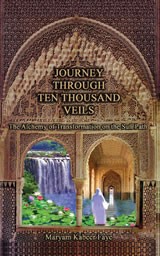 The alchemy of transformation on the Sufi path

When she was twelve years old, Maryam Kabeer Faye was given a painted scroll of an ancient wanderer, upon which were inscribed the words: Seek and The Truth Shall Make You Free. This message galvanized her soul and determined the course of her life. Following the call, she set out on the journey, internally and then externally, and was guided around the world many times, from one remarkable being to the next, everywhere collecting messages and clues.Born in a Jewish family, she was led to live in India and Nepal, and in monasteries in Europe, and then guided to embrace Islam at the hands of an ancient Sufi Master a few minutes away from the tomb of the Prophet Abraham. She then was guided to study intensively with Sufi Masters around the world. Her journey to the holy places and people of the earth, led her finally to Africa and the deep truth that all lives are totally interconnected and united with our own. This profound realization dispelled the great myth that the creations of the One Most Loving Creator can be separated by any racial, national, or cultural distinctions.
This book is a significant and revealing social commentary, also dispelling many other myths and stereotypes such as the proposition, often fostered by the media, that women are inevitably oppressed in Islam. On the contrary, it is by entering into the heart of Islam that the author was liberated, elevated, empowered, and guided to realize the true purpose of her existence.
Maryam Kabeer Faye is a speaker and writer on Islam, sufism, and spirituality. She lives in Philadelphia where she owns a home that is a refuge for spiritual travelers, and she herself travels extensively throughout the world on the mission of building bridges of light, knowledge, and understanding.

Maryam Kabeer Faye is a Sufi master and a frequent speaker on Islam and Sufism.
Email