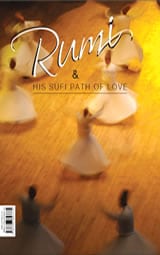 Rumi and His Sufi Path of Love (magazine)

This publication presents Rumi in a collection of articles with contributions from social scienctists, academics, psychologists, artists, and philosophers from an unparalelled geographic range; it is now the opportune moment in this period of conflictual relations between different worldviews to communicate more of Rumi’s thought as it represents common ground for dialogue and mutual understanding.Whirling Dervishes Tour East Coast
The Whirling Dervishes of Rumi from Konya, Turkey, just completed a tour (Oct. 19-26) of six East Coast cities in Massachusetts, New Jersey and Pennsylvania, with more than 4,300 in total attendance. At the events, New Jersey-based publisher The Light sold 1,500 copies of its titles on the Sufi poet Rumi, including Rumi and His Sufi Path of Love (May). The 13th century poet, jurist and philosopher has been called “the bestselling poet in America,” with titles from many publishers remaining perennially popular.
by Lynn Garrett, Religion BookLine, Publishers Weekly, 10/31/2007

Huseyin Bingul received his BA and MA degrees in English language and Teaching. He is curently working as an editor for Tughra Books.