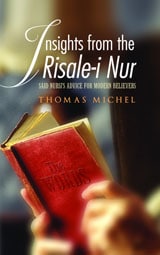 This book provides insight into a deep conversation taking place between a Catholic priest and a Muslim scholar.

Said Nursi (1878-1960) is the most influential figure in twentieth century Muslim scholarship and the author of the Risale-i Nur, a 6000 page commentary on the Holy Qur’an. This collection of essays written by Thomas Michel offers an insightful and comparative analysis into the life, thoughts and major writings of Said Nursi.

After an opening chapter that provides an overview of Nursi’s life and the author’s first encounter with the Risale-i Nur, the following chapter outlines Nursi’s views on Muslim relations with Christians and the possibility of dialogue and unity with the true followers of Christ.

In this chapter, the author notes that Nursi called for unity and cooperation between the Muslim-Christian communities fifty years before the Vatican II called upon Christians and Muslims to recognize that they should move beyond the conflicts of the past and work together for the common good to build peace, establish social justice, defend moral values, and promote true human freedom.

The next chapter compares the thoughts of Pope John Paul II with Nursi within the framework of pardon and peace. The essays then address themes such as modern civilization, war and peace, justice, human responsibility, sincerity and dialogue. The final sections provide an invaluable and contemporary analysis of democracy and societal values, and the current state of societies.

This book provides insight into a deep conversation taking place between a Catholic priest and a Muslim scholar. This sincere and humble collection of essays will be an indispensable reading for believers of all faiths and backgrounds with an interest in social and contemporary issues. 6 x 9 inches / 250 pages paperback

Thomas Michel was ordained a Catholic priest of the Archdiocese of St. Louis and later joined the Society of Jesus (Jesuits) in Yogyakarta, Indonesia. He received his Ph.D. in Islamic theology from the University of Chicago. Professor Michel was director of the Islamic Office of the Vatican’s Council for Inter-religious Dialogue for thirteen years. He taught at various universities in different countries including the US, Turkey, and Indonesia. He has extensively written and lectured on Fethullah Gulen, the Hizmet Movement, and the Risale-i Nur. He is now teaching at Georgetown University’s School of Foreign Service in Doha, Qatar.

Be the first to review “Insights from the Risale-i Nur: Said Nursi’s Advice for Modern Believers” Cancel reply