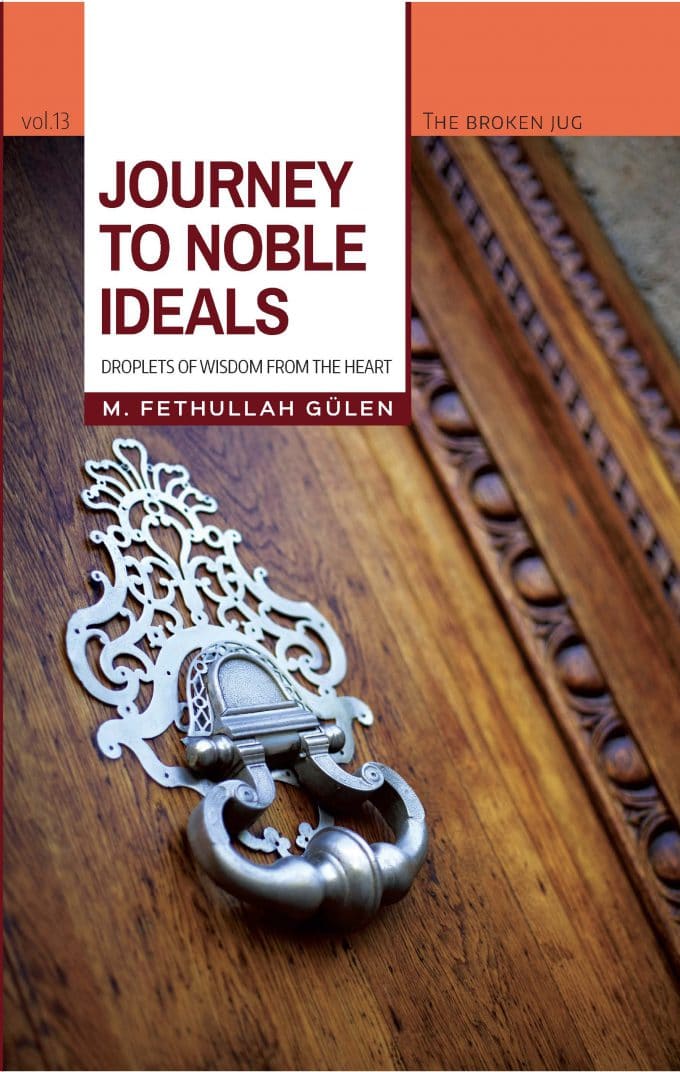 Droplets of Wisdom from the Heart, The Broken Jug Series vol.13

Journey to Noble Ideals is a compilation of speeches Gulen delivered in Pennsylvania, USA, between 2012 and 2013. The book provides guidelines to build our individual ladders to self-discovery. In Gulen’s prescription, climbing this ladder requires “lifelong contentedness,” “a spirit of chivalry,” “becoming soil to grow roses,” “balance and moderation,” “being self-critical,” “not to be dizzy with worldly pleasures,” and “sincerity of intention.” Nourished from a millennium-old accumulation of knowledge and tradition, Gulen speaks of preserving one’s “chastity of thoughts” but not lagging behind, and instead soaring across the “horizons of spiritual knowledge.” For Gulen, a healthy society is built on a “happy marriage,” observing the “rights of neighbors,” “sound reason,” “retreats to read,” and “asking for forgiveness.” Above all, his faith rests on a firm belief that “God is sufficient” for all.

This work will be a source of inspiration for all the travelers journeying to noble ideals.

“My cause!” cried out Bediüzzaman when he tripped over a rock and fell off the high bluff of the Van Castle where had gone on a meditative retreat. Miraculously, after a some-what physically impossible death-defying tumble, Bediü zzaman (d. 1960), one of the most notable Islamic scholars of 20th century Tur- key, landed at the mouth of another cave only three meters below. Still, it is remarkable that in a moment when death appeared so imminent, he remembered his “cause.” What would make him do this? Would you be able to do the same? Do you have such a cause in your life? Do you have a purpose in your life? A purpose, not in the sense of achiev- ing career goals, obtaining the power boat you have always wanted to own, or seeing your team break its losing streak to nab the cham- pionship title, but something deeper, something higher. What is that lifetime dream or the inner call hidden deep in your heart that would make you feel complete if it were to come true? If you do not have such a cause, or even if you have never thought about it, do not worry: you are among the overwhelming majority—or maybe you should worry, for it shows you live only for each day.

This book aims to raise awareness about that call. It is an aware- ness of an inner craving—whether we are aware of it or not—that is always right inside our chest. It is a permanent call, which we ignore more often than not, or work hard to suppress and turn away from. Whatever achievements we might attain in this life are unable to respond to it fully, for ephemeral things are unable to satisfy a per- manent drive. Can you hear that call? Can you decipher its message?

It would seem that a lack of a well-established and worthwhile purpose lies at the very heart of many of the personal and social prob- lems we face today. Graduating from college, deciding on a career, finding a job, traveling around the world… These are human conditions and short term goals, changing and evolving as we grow, and after each one is attained, we ask ourselves “Now what?” We are born into this world, grow from a child into a young man or woman, a college stu- dent, a professional, a father or a mother, an older person, and then we die… And then what? What is the meaning of this universe, and then what comes after it?

Pursuing a dream or an ideal is necessary for a meaningful life, but it begs the question about the nature of this ideal. Hitler had an ideal too, and he devoted his life to what he called “My Struggle” (Mein Kampf). Genghis Khan’s great ambition was to conquer the world; he believed he’d been sent to be “God’s punishment” over mankind for their sins.

On the other hand, you have the example of Prophet Muhammad, peace and blessings be upon him, who did not hesitate even for a blink of an eye when he rejected the best of all attractions this world can offer, such as titles and wealth, and said, “Even if they gave the sun to my right hand, and the moon to my left hand, I will not renounce my mission.” When Dr. Martin Luther King cried out “I have a dream,” he was not speaking of an illusion, nor was he giving the glad tidings of a false dawn, for his words resounded on the foundations of a life- time’s commitment, sweat, and candor.

So, what makes a goal an admirably virtuous one?
In this volume, Fethullah Gü len—a master in diverse fields of knowledge, an authority in religious thought, and a man who has devot- ed his entire life to a higher cause—offers us some useful devices to decipher that inner call, and to do it virtuously. To understand this calling, this is not the only book that you can hold in your hands, but a good number of Gü len’s works are dedicated to discovering a high- er purpose. His books are like signposts for seekers of a cause in this life, and each title is a milestone for a new phase. Gü len wishes peo- ple to become aware of their spiritual capacity and to explore the Emerald Hills of the Heart; he encourages them to work hard to unleash that capacity, so they can erect The Statue of Our Souls; he rejects being egotistical in order to pursue a selfless life So That Others May Live; he envisions a future of peaceful coexistence and directs his read- ers Toward a Global Civilization of Love and Tolerance; and while doing all this, he vows to rely on the infinite powers of the Divine, which are like a flowing river, rather than on the illusionary powers of those other than him, which are nothing more than small jugs of water. This is why Gü len titles his sermons, “The Broken Jug.”

Journey to Noble Ideals is yet another contribution by Gü len which provides guidelines to build our individual ladders to self-dis- covery. In Gü len’s prescription, climbing this ladder requires “life- long contentedness,” “a spirit of chivalry”, “becoming soil to grow roses,” “balance and moderation,” “being self-critical,” “not to be dizzy with worldly pleasures,” and “sincerity of intention.” Nour- ished from a millennium-old accumulation of knowledge and tradi- tion, Gü len speaks of preserving one’s “chastity of thoughts” but not lagging behind, and instead soaring across the “horizons of spiritual knowledge.” For Gü len, a healthy society is built on a “happy mar- riage,” observing the “rights of neighbors,” “sound reason,” “retreats to read,” and “asking for forgiveness.” Above all, his faith rests on a firm belief that “God is sufficient” for all.

The book is a compilation of sermons and lectures Gü len deliv- ered in Turkish, which were then translated into English over the years. The primary audience of these sermons were Muslims; thus the content offers much in the way of reference and allusions to Islam and Islamic history, and, as such, some background knowledge would prove helpful for non-Muslim readers to fully grasp their message. However, we believe that this book can be instrumental for all Eng- lish-speakers, for the underlying tone that shapes the content and the ultimate objective of enthusing a higher purpose to life are universal- ly relevant and a source of inspiration for all.

Preface.
God Is Sufficient for Us
The Most Eloquent Invitation for Divine Providence
Spirit of Chivalry
The Architects of Thought Who Will Build the Future
Lifelong Contentedness
Not Inclining Towards Those Who Do Wrong
Becoming the Soil for Roses
Crying of Those with Sad Hearts
Balance and Moderation
Exaggerated Compliments
Enemies of a Happy Marriage
Self-Criticism and Asking Forgiveness from God
Key Concepts for Interpreting Existence
Horizons of Spiritual Knowledge
Those Who Become Dizzy with Worldly Pleasures and Remain Behind
The Qur’an and Scientific Discoveries
Transforming Knowledge into Practice
Rights of Neighbors
A Social Disease That Paralyzes Sound Reason: Bigotry
Vigilance against Transgression
Offhanded Attitudes toward the Sunnah
The Role of the Spiritual Guide
Our Era and the Ways Leading to God
Worldly Means and the Criteria for Planning the Future
Chastity of Thoughts
Keeping up Sincerity of Intention and Having a Consciousness of Self-Criticism
Temporary Retreats in Serene Corners and Reading Sessions
True-Hearted, but Not a Chauvinist
The Luminous Spiritual Bonds between Muslims
Problems Settled within the Individual and Reforming the Society
Respect for the Sacred
A Builder of Spirituality: Muhammed Lütfi Efendi, the Imam of Alvar
In Order Not to Feel Remorse When It Is Too Late
Saying “I Wish…” in the Sense of Asking Forgiveness
A Time to Listen to Our Souls: The Three Months
Asking Forgiveness-1
Asking Forgiveness-2
Different Kinds of Tests the Devoted Souls Go Through
The Carnal Soul, Satan, and Those Who Straddle the Fence
Essentials for Fruitful Criticism
Relation of Living on Pure Sustenance and Doing Good Deeds
Considerations of Eid
References.
Index 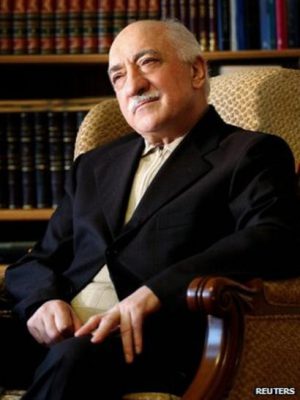 Be the first to review “Journey to Noble Ideals” Cancel reply