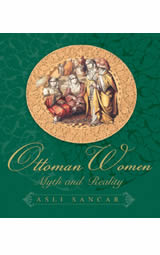 Guided by the accounts of such female travelers as Lady Montagu, Julia Pardoe, and Lucy Garnett, all of whom lived in Ottoman lands for significant periods of time, this beautifully illustrated book explores and hopes to overturn the 19th-century stereotypes of Ottoman women. Both Eastern and Western accounts of Turkish society during that time made much of the harem, with Orientalist writers describing Turkish women as exotic, indolent, and depraved, while some Europeans usually described them as noble and elegant. Then, with the advent of the first women’s movement in the West, the harem began to be criticized as an institution that trapped women and enforced their submission to men. All of these ideas were refuted by Montagu, Pardoe, and Garnett, who argued that Ottoman women were perhaps the freest in the world; this book backs up that claim with historical research showing that women frequently prevailed in cases against their husbands and other male relatives in the Ottoman courts.

Born and raised in the US,Â Asli Sancar has written intermittently on womenâ€™s issues for the last twenty-five years. Most of her articles have been published in Turkish in the Istanbul-based magazine, Women and Family.She has authored Ottoman Women, which was awarded first place in the history/politics category in the 2008 Benjamin Franklin Publishing Awards and was a finalist in cover design.Â Ms. Sancar also lectures extensively in Turkey and the U.S. and has been featured broadly in the Turkish media. In addition to writing, she does English/Turkish translation professionally.
Email

Be the first to review “Ottoman Women” Cancel reply