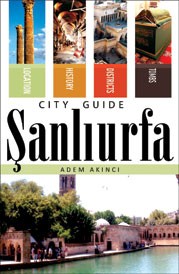 Providing a deep religious history of the region accompanied by factual information on significant sites in the city, this in-depth travel resource focuses on a lesser-known center of trade and culture in Turkey Sanliurfa, or Urfa for short. Known as the city of prophets, the guide outlines Sanliurfa’s numerous religious sites that are frequented by tourists year round, including the cave in which the prophet Abraham was born; Fish Lake, where Abraham was thrown into the fire; the cave where Job was cured from his illness; and the tomb of Elisha. Focusing on the aspects of the city that appeal to the Abrahamic religions, this fascinating manual describes in detail many of the famous ancient monuments in Urfa, including numerous mosques and churches.

He is an academic at the Theology Department, Harran University. He is a writer and a longtime resident of Sanliurfa, Turkey.
Email

Be the first to review “Sanliurfa City Guide” Cancel reply