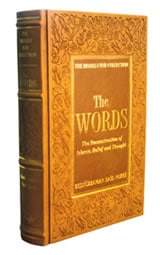 The reconstruction of Islamic belief and thought

This commentary focuses on how to save and strengthen one’s religious beliefs when confronted with the current prevailing philosophy of materialism. The Words forms the first part of the Risale-i Nur collection, an approximately 6,000-page Qur’anic commentary. In this commentary Bediuzzaman Said Nursi’s main concern is how to save and strengthen one’s religious belief when confronted with the current prevalent materialist philosophy. It does not explain when or why a verse was revealed, but rather the truth that it represents. Subjects discussed are God, resurrection, Prophethood, destiny, ego, worship, and how the truth of these matters is revealed through nature. The author also analyzes naturalist and materialist philosophy, as well as scientific theories and findings, and refutes them based on evidence that is clearly apparent in nature itself.

Be the first to review “The Words” Cancel reply