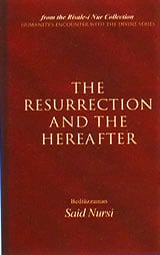 The Resurrection and the Hereafter

The concept of resurrection and its basis in Islam

“How can we flee and hide in nothingness under the ground from the All-Powerful One of Majesty, the miracles of Whose Power in the past—all past events—bear decisive witness to the fact that He can do whatever He wills in the future and Who every year creates spring and winter, which resemble the Resurrection? Since we are not called to account and judged in this world suited to that Power, we must proceed to a Supreme Tribunal and happiness in another.”Bediuzzaman Said Nursi is one of the most influential scholars of Islam in modern Turkey.