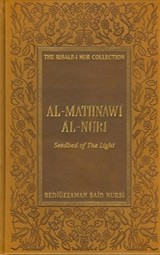 Seedbed of the light

Al-Mathnawi Al-Nuri is a short summary of the topics covered in the author’s great multivolume commentary on the Qur’an, the Risale-i Nur, and provides an outline for the later, more famous and massive treatise. Now available in English, it offers an opportunity to browse through brief entries such as “Flower,” “Spark,” and “Whiff,” each of which is a keyword linked to a passage in the Qur’an or a figure of speech in a theological argument.

Be the first to review “Al-Mathnawi Al-Nuri” Cancel reply