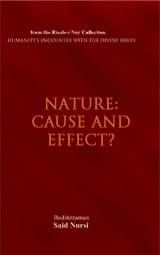 Nature: Cause or Effect?

‘’If the thing which naturalists call ‘nature’ has an external reality, it can, at the very most, be a work of art, not an artist; it can be a design, not a designer; a set of decrees, not an issuer of decrees; a set of the lawgiver; a creation and operation of the universe, not a lawgiver; a created veil before God’s Dignity, not a creator; something originated according to God’s way of acting, not an originator; only a law, not an independent, conscious power or a powerful one; and a set of lines to inscribe on, not a source or origin or an author.’’

Be the first to review “Nature: Cause or Effect?” Cancel reply