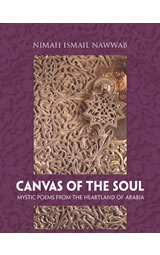 Canvas of the Soul

Video of “Lost & Found” from the Canvas of the Soul

From the heartland of Islam arise poems of fiery love and peace, composed by a modern-day female poet descended from a long line of Meccan (from Mecca) scholars. Reflecting the pulsing, indivisible bridge of the works of great Sufi mystics and poets to modern times, these spiritual pieces recall the beloved works of Rabi‘ah Al ‘Adawiyyah, Rumi and Hafiz. From the land of Arabia where Sufism has been long cloaked in mystery, despite its early roots stemming in the very City of the Prophet, this volume serves to transcend time through filling the existing gap between the early beginnings and the little-known Sufi traditions of current-day puritanical Arabia. These poems also highlight the global and local Sufi spirit enlivening the younger generation. The shedding of the ego, humility and the quest for spiritual heights are glimpsed in this rare volume of verse. Drawing on a rich religious legacy and led by the Sufi tradition seeking Unity, the poems cover aspects related to spirituality and present-day challenges. The inspiring combination of the traditional and modern in these compositions will touch the inner souls and captivate the hearts of those interested in Higher Love in these turbulent times of transition and frantic search for peace.”The voice of a female Saudi Arabian poet expressing her deep spiritual yearnings in Sufi- inspired poetry is indeed a rare but also precious experience amidst all the din of strife and anger that surrounds so many Muslims today. This voice recalls that Islam emphasizes not only Divine Justice but also Divine Mercy and that the Blessed Prophet reflected not only Divine Majesty (Jalal) but also Divine Beauty (Jamal), the latter possessing a female dimension that is so evident in classical Sufi poetry. The present book is significant in that it reflects something of that classical expression of spiritual beauty in a contemporary language expressed by a female poet who hails from the land where the Blessed Prophet was born, carried out his prophetic mission and died.” – Seyyed Hossein Nasr
“Nimah is a talented writer and poet who isn’t afraid to speak her mind and address issues that, quite frankly, are often ignored as a result of timidity. I commend her efforts in this noble initiative where the arts combine in powerfully written poetic compositions and a showcasing of Islamic arts.” – Sami Yusuf, International Musician, composer, UN Celebrity Partner and initiator of the Spiritique genre of music.
“The words on offer here are brilliant and enriching, drawing deeply from their Sufi legacy. Nimah Nawwab presents us an immediacy to the Beautiful Beyond, while refining the sensibility out of which our desires are purified. We heartily commend this volume of poems to readers/lovers everywhere.” – Daniel Skubik, Professor of law, ethics, and humanities in California Baptist University

Nimah Ismail Nawwab is an editor, poet, photographer, lecturer and youth empowerment leader from Saudi Arabia. Her previous book, The Unfurling was published in the US in 2004 and was listed as a best-seller in poetry. Nawwab has contributed to several publications internationally with work featured at major international media outlets including Newsweek, The Washington Post, BBC World News, Asian Age and various others. She continues to to deliver workshops on poetry composition, appreciation and critiquing and various genres of writing including creative writing and journalism. She also lectures on a range of subjects including poetry, the Middle East, women and youth empowerment at various global venues.

Be the first to review “Canvas of the Soul” Cancel reply