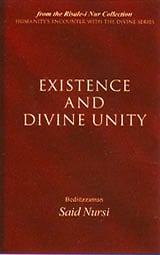 Several Quranic verses are interpreted to elaborate on the concept of Divine Unity.

“Had there been in them (the heavens and the earth) any deities other than God, both would certainly have fallen into ruin.” (al-Anbiya 21:22)”There is no deity but God, He alone; having no partner; His is the Dominion and to Him belongs all praise; He alone gives life and causes to die; He is All-living and dies not; in His hand is all good. He has full power over everything, and to Him is the homecoming.”
Bediuzzaman Said Nursi is one of the most influential scholars of Islam in modern Turkey.

Be the first to review “Existence and Divine Unity” Cancel reply