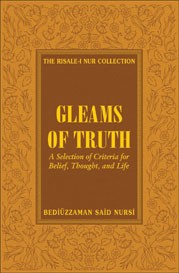 A selection of criteria for belief, thought, and life

Concise and articulate, this collection of maxims reflects a lifetime of knowledge surrounding the Qur’an. Presenting an Islamic understanding of God’s oneness, morality, and philosophy, this anthology expounds on the key discussions of the Risale-i Nur Collection, offering a compilation of wise sayings that remove the veils on the mysteries of human life, present strong evidence for God’s existence, and provide thought-provoking arguments against philosophies of unbelief. Penned by a noteworthy Islamic thinker and influenced by his time as a member of the Higher Council of Islam, this volume denotes the work of an ambitious man who occupied himself with the salvation of humanity both from the destructive wars in this world and chastisement in the Hereafter.Bediuzzaman Said Nursi was a 20th-century scholar of Islam. He is the author of the Risale-i Nur Collection series.

Be the first to review “Gleams of Truth” Cancel reply