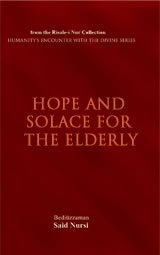 Hope and Solace for the Elderly

‘’Through the light of the Qur’an, I saw that both for myself and everyone else this world is a temporary market place set up on the road for the passers-by to shop in, a guest-house which every day filled and emptied. . . O respected elderly men and women who feel their old age as I do! We are leaving; there is no use in deceiving ourselves. Even if we close our eyes to it, we will not be allowed to remain here. There is mobilization. The land of the Intermediate Realm of the grave, which appears to us as dark and as the land of eternal separation because of the delusions that arise from heedlessness and in part from the people of misguidance, is the meeting place of friends. It is the realm where we will meet with, foremost, God’s Beloved, upon him be peace and blessings, and with all our friends.’’