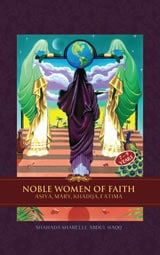 Imam Ahmad recorded that Ibn Abbas said: “The Messenger of God drew four lines on the ground and said, ‘Do you know what these lines represent? The best among the women of Paradise are Khadija bint Khuwaylid, Fatima bint Muhammad, Maryam bint Imran, and Asiya bint Muzahim.'”Asiya: The daughter of Muzahim, wife of the Pharaoh
Mary: The virgin mother of Prophet Jesus, peace be upon him
Khadija: The first wife of Prophet Muhammad, peace and blessings be upon him
Fatima: The fifth child of Prophet Muhammad and Khadija
God has promised the highest level of Paradise to these women.
The truth, wisdom, and lessons to be learned in these stories are from AllMighty God, and any mistake or shortcomings is from myself.
I have known suffering and adversity in my life, so it has been a great honor to translate the stories of these great mothers in Islam for you.

Shahada Sharelle Abdul Haqq  is an illustrator for children's books and a member of the founding team of Huntsville Islamic Academy, Huntsville, Alabama. She holds a Bachelor of Fine Arts degree She is the author of bestselling title Stories of the Prophets in the Holy Our'an. Sharelle is a member of the Pan­ American Montessori Society. She lives with her five sons in Huntsville, Alabama.

Be the first to review “Noble Women of Faith” Cancel reply