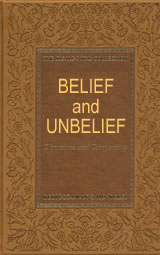 Discovering the true essence of one’s self, the universe and life

Discussions and comparisons vividly demonstrates the true natures of and difference between belief and unbelief through both concrete and rational arguments and producing the human conscience and basic nature as witnesses, especially through comparisons of belief and unbelief, of right guidance and misguidance. Using easily understood stories, comparisons, and explanations, the author produces categorical proofs, showing that modern scientific discoveries actually support and reinforce the truths of faith. Nursi uses the Qur’anic methodology of addressing each person’s intellect, and other inner and outer faculties, to encourage people to study the universe and its functioning in order to understand creation’s true nature and purposes, which will, in turn, lead to learning the Attributes of the One and only Creator as well as their own duties as God’s servants.

Be the first to review “Belief and Unbelief” Cancel reply