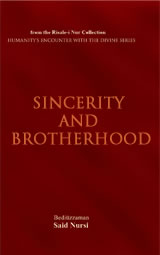 Whatever one seeks with sincerity, God will grant it to him or her.

You should pursue God’s good pleasure in your actions. If He is pleased with you, even if the whole world is displeased, it is of no consequence. If He approves, it has no effect even if all others reject your ideas or actions. When He is pleased and approves, even if you do not seek the approval of others, should He will it to be so and His Wisdom requires it, He will make other others accept it and be pleased with you. For this reason, it is absolutely necessary to aim at God Almighty’s good pleasure in the service of the Qur’an and belief.

Be the first to review “Sincerity and Brotherhood” Cancel reply