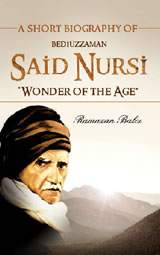 A summary of a hard but fruitful life, spent in the way of faith, truth and philanthropy

In the many dimensions of his lifetime of achievement as well as in his personality and character, Bediuzzaman Said Nursi (1877-1960) was and, through his continuing influence, still is an important thinker and writer in the Muslim world. Nursi lived in Turkey during a troublesome transition period; he witnessed the last days of the Ottoman Empire and the birth of a secular Turkish republic. He lived in an age when materialism was at its peak and many crazed after communism, and the world was in great crisis. At a time when science and philosophy were used to mislead young generations into atheism, and nihilistic attitudes had a wide appeal, at a time when all this was done in the name of civilization, modernization and contemporary thinking and those who tried to resist them were subjected to the cruelest of persecutions, Nursi strove for the overall revival of a whole people. Even though his non-violent stance was clear, he was seen as a potential danger and exiled to different corners of Anatolia. During the exile, he started writing his magnum opus the “Risale-i Nur” (Epistles of Light), by which he aimed to guide people to the truths of faith and make them understand the Qur’an correctly. This book provides a summary of this hard but fruitful life, spent in the way of faith.

Ramazan Balci, PhD, is an expert in nineteenth century Ottoman history. He currently works at the Ottoman Archives in Istanbul.

Be the first to review “Bediuzzaman Said Nursi: “Wonder of the Age”” Cancel reply