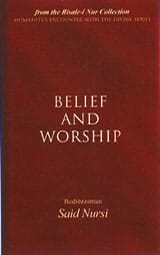 “O arrogant soul! You are (that) traveler, and this world is the desert. You weakness and poverty are endless, and the endless, and enemies and privations to which you are exposed are beyond number. Given this, invoke the name of the Eternal Owner and the Everlasting Ruler of this world, for only this can deliver you from such begging and fear.”

Be the first to review “Belief and Worship” Cancel reply