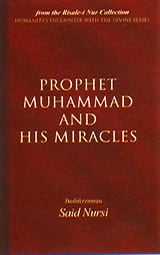 Prophet Muhammad and His Miracles

Prominet scholars of Islam say that the evidences of Prophet Muhammad’s Prophethood and his miracles amount to about 1000. Countless people have affirmed it in their own particular ways, and the Qur’an itself provides thousands of such proofs. This book by Bediuzzaman Said Nursi talsk about some of the extraordinary incidents that happened at the time of Prophet Muhammad, peace and blessings be upon him, in support of his Divine mission, that is, calling people to Islam.Bediuzzaman Said Nursi is one of the most influential scholars of Islam in modern Turkey.