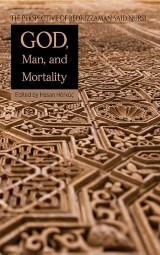 “God, Man, and Mortality is a collection of essays written both by seasoned and by up and coming scholars working in the field now known as Nursi studies. The aim of these essays is to hold a mirror up to Nursi’s teachings on a number of theologically important issues, just as Nursi held a mirror up to the teachings of the Qur’an. The scope is broad, covering subjects such as Divine immanence and transcendence, human spirituality and man’s role as Divine vicegerent, Divine determining and free-will, and human conscience as evidence of the existence of God. The topics presented by our authors are unashamedly theocentric in nature; discussions on politics and legal theory are conspicuous by their absence. We benefit from the depth of awareness that the contributors clearly have of Nursi’s teachings and his place in the Muslim academe, as well as from their lucid expository styles and strong authorial voices. The field of Nursi studies is no more than twenty years old, but already it can claim a number of distinctive works on Nursi and his teachings that are exemplary in their scholarship. God, Man, and Mortality is, I believe, another.” Colin Turner, Reader in Islamic Thought, Durham University.

Be the first to review “God Man and Mortality” Cancel reply